Can't believe we did it! 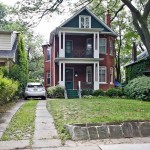 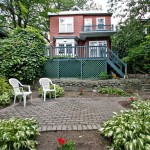 After 8 years of admiring one of the houses in our neighbourhood and dreaming of ways to fix it up, we somehow managed to buy it! The former owner was a 95 year old woman who had been very active in the community, but she unfortunately just couldn't stay in her beloved childhood home any longer. When I heard that the family might be selling the house, I decided to make an out of character bold move and send them a note. I wrote about how much I admired the house and the area, and that we would love to buy it from them. To my delight, they responded saying that they would consider it. Although there was some uncertainty about it all for a little while, and we saw so many people going through the house, in the end it all worked out. We managed to buy (and close!) the house in a very crazy 3 days!
So now the work begins. We have a pretty healthy budget for the renos, but we also have some pretty grand ideas for the place! And after speaking with 2 architects, we were told we'd have to double our budget to get what we wanted. A little discouraging, but I know we'll work it out.
Posted by Keira at 20:22